The Many Uses of AI & Technology in the Compliance Industry 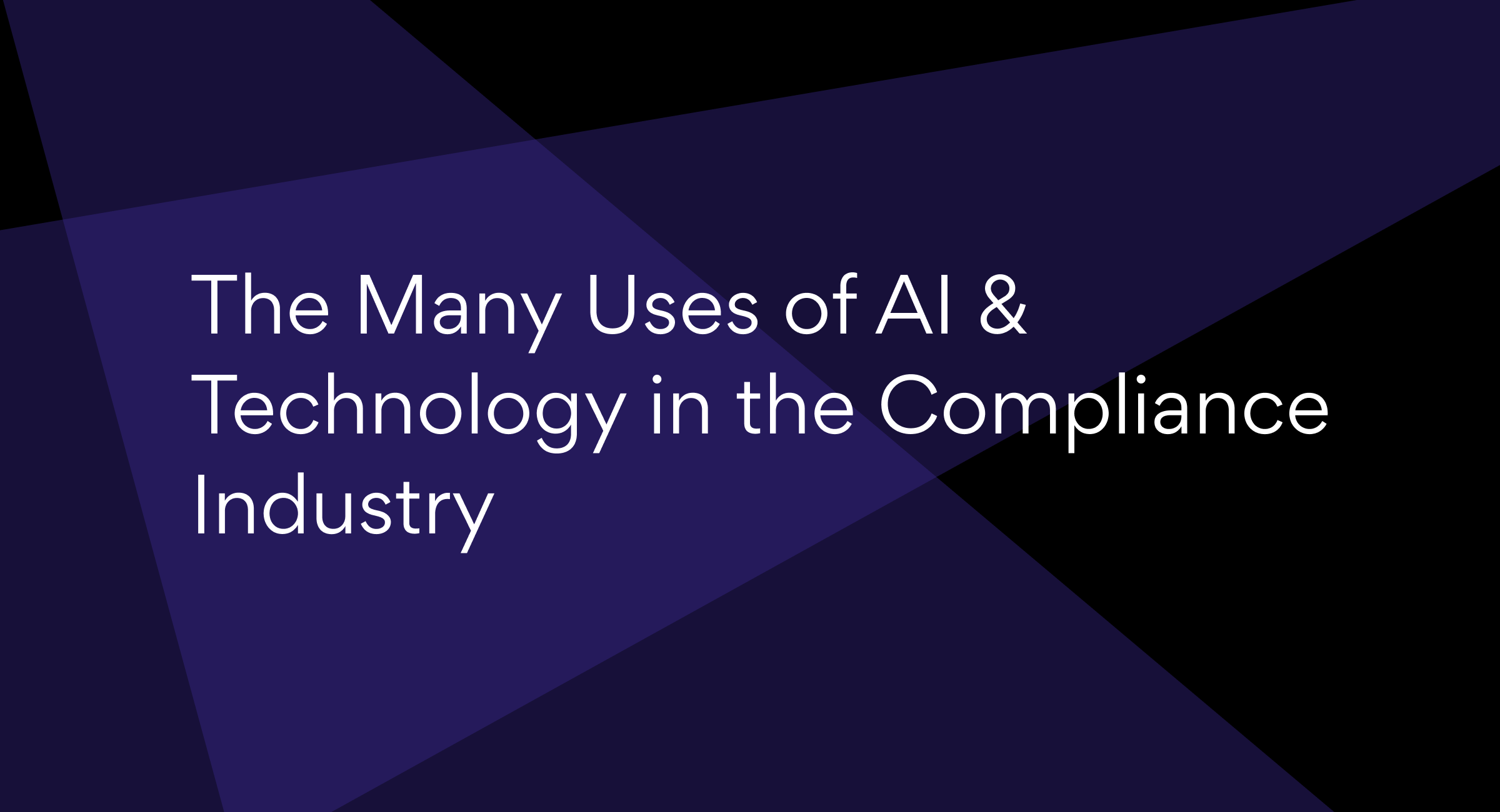 Curious as to what marks the crossroads between compliance and technology?

A live discussion held by The Association of Governance, Risk and Compliance in April tackled exactly that: the many uses of artificial intelligence and technology in the world of compliance.

Starring Julia Ront and Anton Vedešin, Ph. D., the CEO & Founder and Technical Founder of Vespia, respectively, and led by Mateo Jarrin Cuvi, Global Manager for Partners & Media at The AGRC, this webinar discussed the role being carried out by technological innovation in helping companies meet their regulatory obligations and avoid being penalized by the authorities.

With this post, we are bringing the highlights of the event in case you missed it! You will get answers to the questions below:

How have you seen technology's role in compliance and AML evolve during the past decade?

Julia Ront: "It has not really evolved that much. There have been attempts and tests and some start-ups here and there trying to shake things up, but I have yet to see this big boom-like explosion, something magical and big like Uber or the iPhone. You know that kind of level. We have yet to see that. I am hoping and I am actually pretty sure it is going to happen in the next five or so years, maybe we can also contribute to that with Vespia. But, yes, it is quite fragmented at the moment, and there have been some attempts but the issue so far has been that usually, people that are trying to implement new technologies and test some new things in the world of compliance come from a quite traditional background: banking, auditing, traditional compliance, etc. Oftentimes they do not want to go out of the scope of what is possible today, what is acceptable, and by law what is allowed today. Therefore those experiments do not go too far."

Anton Vedešin: "I know companies and how it is done and usually it is very fragmented and the solutions are built in-house. Of course, there are some solutions but they are not public, they are not yet products, there is no sort of a standard and there is no knowledge accumulation. Each company is solving it themselves, there is no synergy and it would be great to see in the future, that kind of synergy happening."

Do you have any thoughts on cryptocurrencies and the push by governments to regulate these assets? Any ideas on how technology or AI can be a protagonist in helping companies comply with growing regulatory obligations in this sector?

Anton Vedešin: "Obviously, the regulations and the regulators usually behave according to this game theory where if you basically control or you have too much control, you have a lot of controllers, then it might create a burden on those companies who basically are transparent and they do only good and this type of things. And vice versa, if you are under control, then those companies who want to break the law, who want to abuse the law, they get the profits, they do not pay taxes, and so forth. Usually, it is all about balance.

From my perspective, AI can help to keep this balance because AI, e.g. the blockchain, could be a third party that is analyzing, let us say, transactions, analyzing the data, and so forth, and just giving some signals to the official, so there might be a check needed. The other companies should not expose all the data or the exposed data every time and vice versa, there is a lower chance that somebody will just abuse the laws and basically act inappropriately."

What does the future of RegTech have in store for us?

Julia Ront: "This is my favorite question. I love thinking about the future of RegTech and I think honestly that it is going to become its own category. Currently, oftentimes, we, RegTech professionals, know what RegTech is, we always see ourselves, and we can check the right boxes when we go to RegTech conferences, but we are also a start-up and we oftentimes go to these general conferences and start-up conferences, and it is always a struggle. Am I a FinTech? What am I? I do not know usually, RegTech is considered to be under FinTech, it is the enabler, it is a supporter of FinTech, it was created for FinTech obviously and the financial world, but I think it is going to come out of the FinTech part and just become its own category. In my opinion, RegTech is not only about regulatory technology and regulatory compliance anymore, but also expanding so it is going into logistics and the e-commerce and sharing economy and Airbnb and Bookings. Therefore, it has a lot to do with trust as I mentioned before. Trust is super important, we are also promoting building trust and knowing and trusting your customers, and partners, and maybe this category is going to be renamed, maybe it is going to be Trust Tech or verification or something. This is the future that I personally see.

Another thing is definitely that predictive analysis is a major thing. So, yes, currently we are concentrating a lot on what is happening with people, with companies, in terms of anti-money laundering today, but it's going to be the trend, it is going to be that, okay, but what is going to happen with this company in five years or next year? Is it going good based on what we already have or is it going bad? Because usually why compliance is necessary is because you want to strike a deal, probably some sort of a deal, some sort of a contract, and if you base your decision without actually thinking about what is going to happen with this deal in the nearest future, then, yes, you can get stuck with not the very best deal.

I also see data quality as an important factor. There was a trend for some time in the compliance world of who had the most sources, who had the best, who had the most registers, the most Dun & Bradstreet attributes, whatever. It was the trend and there was just the strength of collecting as many sources as possible and just throwing a bunch of data at the user and letting them figure it out. Once we started Vespia we saw this as a problem and we did not want to do it this way from the first day: just collect a bunch of sources. It's more about the data quality and I’ve read a few reports that also say that this is going to be the trend and we're not the only ones fortunately who have noticed this, that there are gaps in the data, there are gaps even in the business registers, them not having owners or shareholders of a company, so it's going to be about data quality and also presenting the data in a more easy, graspable way for the decision-making process to be faster, smoother, and also maybe finding some alternative data sources, not just the traditional sanctions lists and business registers, but maybe social media, LinkedIn profiles, what not, crypto wallet information, etc. Some alternative sources definitely."

Anton Vedešin: "From my perspective, it will be somehow combined or evolving near the Legal Tech technologies, too. And one of the interesting phenomena is smart contracts on the blockchain, basically pieces of code, third party, which is not like you can't give money to a smart contract to do something for you, right? You cannot affect it, it is just a piece of code on a computer, and you cannot really affect it. From my perspective, the phenomena of the smart contracts in the future will affect both RegTech and Legal Tech so the companies, people will, let us say, want to buy a car, you basically send tokens, or you publish a smart contract, which enables people to get the parts, assemble the car, and this type of things. Or if you want to buy a house, build it, or buy a certain service from another company using pen and paper just like PDFs, is pretty hard to process or check for different types of legal aspects. The same thing with taxes and the regulations and so forth, it is hard to check. Imagine the world where now you have the contract in a completely digital format like an information smart contract, which already takes into account all the regulatory topics on behalf of you, you basically don't need to do much there, right? In the future basically, whenever you swipe with the credit card, actually maybe it's not the credit card anymore, it's an app on the phone like the one you may use to pay for a coffee in Starbucks, then automatically the certain amount of money in the token format goes to the salary of the person selling you the coffee, making the coffee, then the rental for the space, it does that automatically, it can go to different wallets or accounts, and the share could be given to the tax office. Ultimately you do not need accounting, you do not need people typing in the numbers, it is automatic. The regulations too, you can just comply with the regulations automatically but just using smart contracts, for example. This is the future I see."

What is in store for us when it comes to Vespia?

Julia Ront: "We are building a Vespia community through Discord. Also, soon Vespia will start issuing Vespia digital passports, and with this passport, you will be able to get verified and onboarded as a business in a matter of seconds. It is not live yet, and it will take us some time to actually come up with this, but it is just a concept, and we are currently onboarding the early adopters for this digital passport. I encourage you to get on board and help us build the best version of it. It is all actually thanks to the users that we can achieve these goals.

And another thing is that we got really inspired when we went to the NFT Tallinn Conference earlier this year, and we decided to play around with the concept of Web 3.0 and actually try to build a whole Vespia ecosystem, a Vespia register. Soon you will be able to hear more about how to participate in this building of the Vespia register, and how to start earning rewards and a reputation in this ecosystem."

Help us build the Vespia digital passports. Join our Discord!

Do you have any burning questions about our platform? Book a consultation with us here!

Liked what you just read? Watch the full recording, and let us know what you think!